This summer, during a lull in the COVID numbers, we went for a road trip. It was a big loop, over from Berlin to Krakow, down through Slovakia, across Czechia, Austria, and on to Venice. Then we came back in more or less a straight line, passing through Salzburg and Carslbad. We were within the old borders of the Holy Roman Empire for the entire trip. And with COVID, borders were on our mind.

Germany just celebrated 30 years of reunification. Someone said it was the best 30 years ever for the region. If you check this map of European borders from the last 1000 years, you can see what they mean about some hard times for Germany: 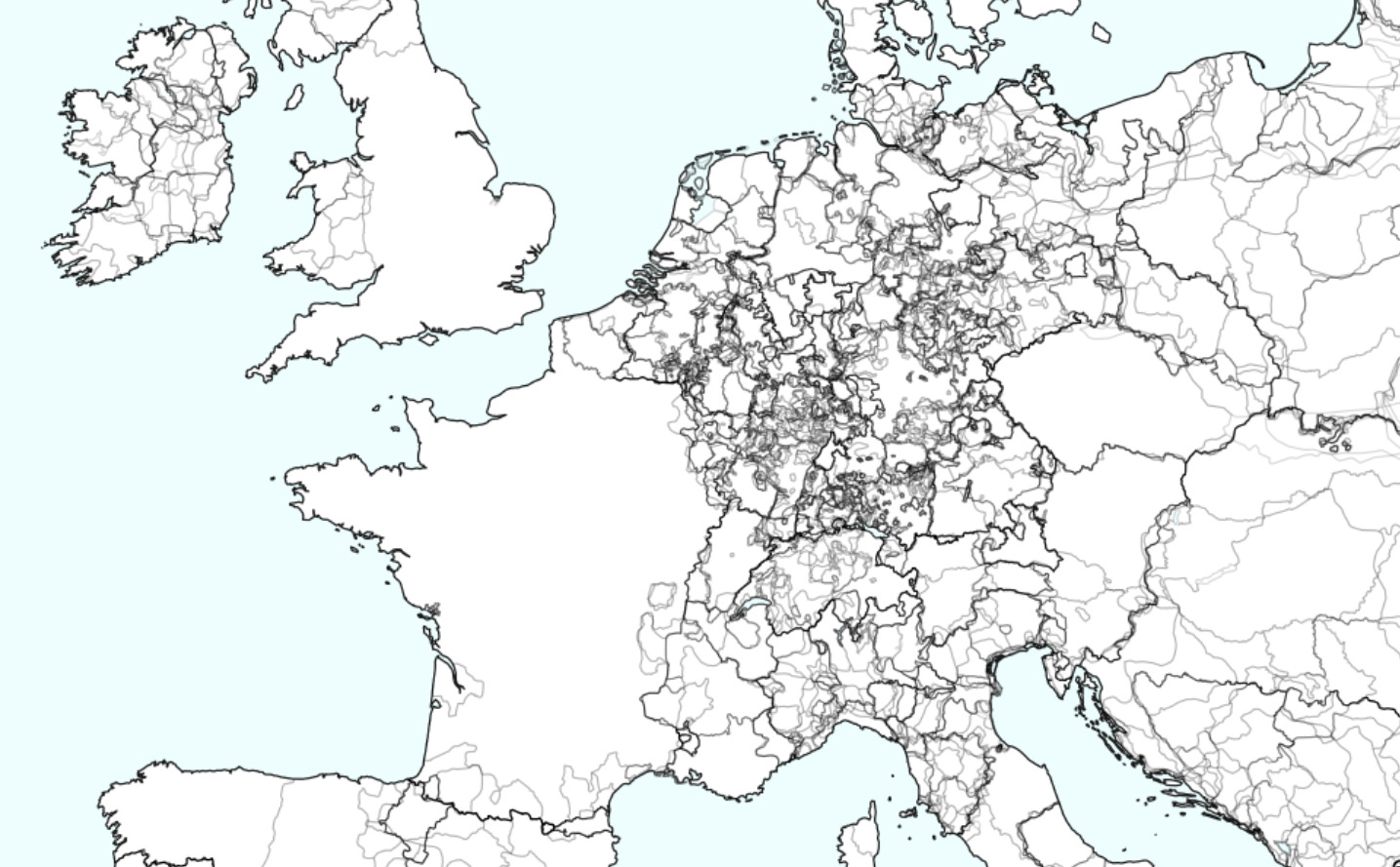 A lot of that scar tissue dates back to the Holy Roman Empire, also known as the Reich, or the First Reich if you like counting your Reichs. It has been unpopular to count Reichs past 2 for some time now. Anyway the Reich was just nuts. There was the Emperor, elected but holy (like the Pope), the electors (7) who held special power, the various estates (one set religious, another set secular), the free cities (Hamburg is still called the Free and Hanseatic City of Hamburg from when it was one), at least two distinct court systems, and to top it all off you could mix it up: subjects of a religious estate could rule over a secular state and so on. Ever been involved in a property line dispute? Had to move a fence or negotiate some kind of arrangement to not have to move a house? This was a major part of the business of the Reich.

Into this complex web of interdependency came religious wars. Now with the property line dispute there was some upside to just murdering your neighbor, and thus avoiding the whole “moving the fence” problem.

I’ve been thinking a lot about this war recently, because it reminds me of politics in the US.

The first big religious dust up came circa 1415, and set the stage for the 30 years war that followed later. Jan Hus was a prominent thinker in Prague and he complained about the church, whose priests sat around all day sinning, drinking wine, and selling indulgences. He demanded 4 things: “Priests should actually preach, we should all get to drink the wine, priests should stop selling favors for money, and it should matter if they commit sins”. Implicit in these requests was a plea for the same rules to apply to everyone. The church said “shut up little man” and burned Jan Hus alive.

But just about everyone in the area agreed with Jan Hus, and so they started to turn on the priests. A few years after his death some “Hussites” went down to city hall and threw the representatives of the crown out of a high window. I guess after they fell they squirmed down there, not quite dead, so the Hussites finished the job with rocks. Maybe you’ve learned the word “defenestration” to describe being thrown from a window? It’s not really a word, or at least, not a useful one. It refers to this deal here. And hold on to your hat, it starts a war! And then in 200 years, they do it again in Prague, and it starts the 30 years war! Careful who you throw out the window.

The Catholic church called up all their mercenaries from Europe, but I guess they were soft or the Hussites were total badasses or both because the Hussites won conflict after conflict and then were able to remain Hussites for 200 years. They made the German speaking Catholics leave. For revenge they were running around killing everyone from towns that had sent troops against them. So to make peace the Catholics had no choice but to finally agree that “Priests should actually preach, we should all get to drink the wine, priests should stop selling favors for money, and it should matter if they commit sins”. At least on paper.

In the demands of the Hussites against the corrupt powers that ruled their lives, I hear echos of Black Lives Matter. “Stop killing us, hold yourselves to the same standards you hold us, and start providing social services instead of jail for those in need”. Why when faced with such reasonable demands, would you first launch a war? Why not just give in? “Sounds good, we’ll do it eventually, but first maybe lots of people should die?”

Fast forward 200 years, and Martin Luther has now done his thing and there are Protestants. Martin Luther’s complaint can be heavily redacted to a mere subset of Jan Hus’s request “priests should stop selling favors for money” though he was perhaps more direct: the Church does not have the power to absolve sin, that happens between God and the sinner. But unlike with Jan Hus this disagreement led to a real split in the church, and now there was a turf war over things like who owned which church, and who could build new churches where.

In Prague, a group of powerful Catholics visited Protestants to answer questions about these church turf wars. They gave bad answers, and the Protestants threw them out of the window. If you have a contentious meeting in Prague I suggest booking a room on the ground floor. The Catholics bounced though, and managed to survive the fall. The Protestants didn’t finish the job with rocks this time. When the victims reported the attack, everyone geared up for war. 30 years later nearly half of the population had been slaughtered. And it was the ugliest sort of slaughter. Consider the sack of Magdeburg: after having robbed, tortured, raped, and burned everyone alive in the Protestant town, the next morning with the sickly smell of barbecue all around, the Catholics celebrated mass in the captured cathedral. The goal wasn’t justice or peace or a return to harmony, but to “own the libs”. The goal was destruction of the enemy. “Don’t you hate Trump supporters? Why don’t we just kill them all?”

Fast forward 400 more years and here we are, thanks to these fights there are technically still Catholics and Protestants, and some people still believe that Catholic priests actually have the power to forgive sin. But whatever. I bet if you press the Catholic priests on the matter they will say “your sins are forgiven, but only if you have actually repented and made your peace with God”. Toh-may-toe Toh-mah-toe. Nice job owning the libs and laying waste to everything you held dear for that, you religious fuckwads.

But with all of the mess in Europe’s history, our present day road trip was hassle free. We crossed borders without stopping the car. No one fights over the grand old churches anymore. Now they are all defacto owned by tourists in short shorts and sandals making duck face and taking selfies in front of the Madona cradling her dead marble son. The great first battle of the 30 years war was the Battle of White Mountain. White Mountain is now a place to walk your dog out by the airport in Prague. It may have taken a few hundred years, but in the end the moderates prevailed and the decency we all crave won out.

“Such fundamentalists demonize ‘the other’ as evil in the psychological equivalent of declaring war, cutting off all possibility of dialogue or compromise. They no longer feel obliged to treat opponents as human beings. Problems to which they might have contributed are blamed entirely on the enemy. But such self-confidence is inherently dangerous to themselves as well as their enemies. The belief in divine assistance encourages fundamentalists to take risks, convinced that mounting odds are merely part of God’s plan to test their faith. They remain convinced that ultimate victory is theirs by right. This can stiffen resolve and motivate stubborn resistance, but it is poorly suited to achieving military success. Fundamentalists have no real knowledge of their opponents, whom they make no effort to understand.”

It is a competitive disadvantage to be wrong, and given enough time right ideas must float to the top. How long will it take the US to float some good ideas? How many bad ones will we try first?