A day of fishing

You meet everyone twice 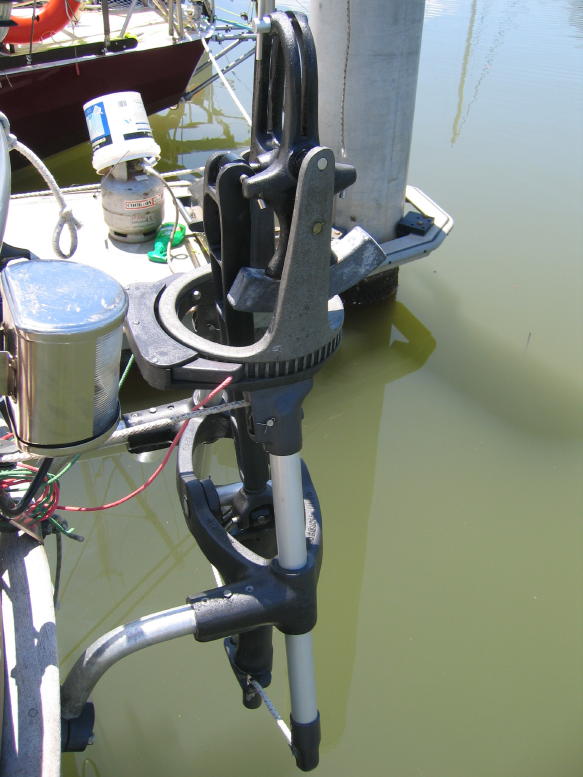 New windvanes cost a bunch. I feel as though they should be cheaper than bicycles to produce, having fewer moving parts and similar or smaller loads placed on them. But bikes cost 500$ and windvanes cost from $3000 to $6000. I guess its a small market.

Trying to save a buck I got a used Aries windvane from craigslist.  Having never used a windvane before, I couldn’t evaluate its condition, but though all parts moved freely it was a non-working item. The key is that the parts that move from the “sail” to the “rudder” not only move but move very freely. In the case of the Aries, age constricts the passages for these sensitive moving parts, adding friction. The fix is to take it apart, replace or ream out the plastic bushings, and put it back together. In many cases this is far far easier said than done. In fact, if you are just shopping for a windvane, I recommend looking for a different used model. I expect that most other models will provide less trouble. The Aries used aluminum and stainless steel parts, which give a lot of trouble after 40 years.

The main problem is to drive 2 stainless pins out of their aluminum brackets. I used liquid wrench solvent, a butane torch, and a 12 pound sledge. I was able to remove the main pin, though I cracked the frame in doing so, so be careful. The crack went halfway through, just on one side of the hole, so the windvane is still strong. The smaller pin would not budge and the frame is weaker up there so I couldn’t convince it to move. My attempts freed one side, but further whacks just crushed the frame together, and did not free the other side of the pin.

Do not spare the torch, get it good and hot. Nothing budged unless it was very hot.

I had a surprisingly easy job getting the set screws out of the frame, thankfully. One cracked once halfway out so it was no longer set, but also not removable. Since the set screw was meant to hold the main pin in place, and the pin is impossible to move unless under the torch and hammer anyway, I didn’t mind this failure :)

I was able to scrape out bushing 53 to increase its diameter.

Despite the troubles I faced it is now back together, moving freely.

I’ve never used any other windvane but I feel the Aries has a unique and a desirable feature. The course correction setting is by pull lever which rotates the “sail” 6 degrees per pull. So even in the dark reliable course corrections are easy. Other vanes use a friction clutch and free rotation allowing an infinite but less certain adjustment.

If you are thinking twice about getting a used vane, I suggest looking at the Cape Horn vane, I see lots of units around so you will be in good company. Good luck!