Starter motor on my mind, I called Masco Starters on the east coast first thing. Oh yeah, they say, they really should include instructions. I note that they also post none online, but maybe the internet craze is coming slowly to the world of auto parts. You should ignore the post with the plastic boot, they say. Just put positive to the bare nut. OK. I gave it a try. Crank, whirr. Almost, but something is still wrong. I look at the starter motor, hanging off the engine. I guess its too early for me to be clever. I didn’t bolt the starter to the engine after mounting it. I put it on properly and gave it another try. Vroom. Chugga chugga chugga. Oh listen to that symphony!  Never mind that I could have done the same thing from Effingham Bay. Here we are, the end of August, where we need to be in a boat that works. And what is more, where before we felt some dread at the prospect of heading out to the open sea for an extended trip, we now feel positively lucky to get the chance.

I started it again later. It used to require the use of the cold start assist, this engines version of glow plugs, and sometimes require a few cranks. Not anymore. The thing just roars to life now, at the first crank, even if its been over a week since it last started. The new part is Masco MA-10007. It looks different and works better. If you have an old Lucas 26163 of M45G starter motor and your diesel is slow to crank, consider the upgrade.

I brought the old starter motor to Erik Larsen the mechanic I would prefer not to be familiar with. He saw me come in and smugly suggested that he was right the new starter didn’t help. No, the new one works great. I thought I would bring you this old one as a gift. You might consider giving me a refund, as you haven’t fixed anything or helped me in the slightest. "A refund!?!“. Well, anyway, keep the motor, goodbye.

If you have the misfortune to have diesel problems while in the area of Tofino or Ucluelet, try to make it to Port Alberni. And if you must go to Erik Larsen Diesel, do so with a heavy heart. 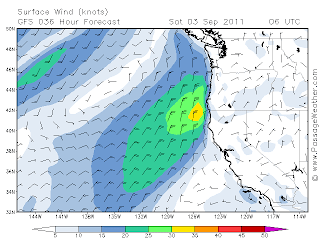 As I write this, I am wearing a sweater and my hands are chilly. The season is changing. The weather off the coast of southern Oregon is windy, but is forecast to become calmer after the weekend. We plan to leave on Saturday (never a Friday!) and hope that southern Oregon will be good to us. We will be keeping to within 20–30 miles of the coast, where we will still be VHF range, and have some chance of a reaching a safe port if we have advance notice of a storm.

Wish us the right amount of wind, tuna, and luck.