Drinking and driving in Amman

Sails for a long trip

I’ve been reading John Voss’s account of his long trip in a modified dugout canoe. It is written in that flat style, where totally incredible things are described in a dry matter of fact tone. It was inspired by and written shortly after Captain Slocum’s account of travelling alone around the world, which has that same tone. Both men had been skippers of cargo carrying clipper ships that had been superceded by boats with engines. The tiny craft was 10 feet shorter than Slocum’s boat and had no keel to boot. It was considered suicide to take on the ocean at all, and Voss sailed it 40,000 miles. He knew what he was doing though. He decked it over, and used a combination of sail plan and sea anchor to ride safely through the worst weather. His account provided guidance to future sailors, experience that can only be won by trying. Read the account; make it a double header and read Slocum’s book if you haven’t. 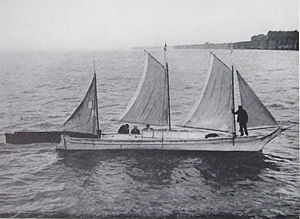 I looked at the images of his boat and noticed that the credits were to the museum in Victoria. We had just walked by that museum earlier that day. The next day we didn’t have time to make it the museum, but at night we stopped and peered in the windows. There she was, visible from the front door. A guy walked up and asked us what we were doing. "Just gazing at the Tilikum". "Oh, do you want to go in and see it?“. "Uh, yes”. The fellow ran the museum and was coming in after hours to do some work. What luck. We talked about Voss and touched the boat. What a thing. What a time to have been alive.

Desolation Sound and Beyond